In response to public comments on the Draft Environmental Assessment (EA) completed in early 2020, the Alaska Department of Transportation and Public Facilities (DOT&PF) expanded the project scope. Key changes include:

Development of a new Environmental Document is beginning in spring 2021 with agency scoping and public involvement for the expanded project.

DOT&PF is proposing to construct safety improvements along the Seward Highway between Windy Corner, at MP 105, and Rainbow, at MP 109.5 (see figure below). The Seward Highway within the project corridor traverses Chugach State Park (CSP) and is a National Scenic Byway and All-American Road known for impressive scenic views, wildlife, and recreation access. This stretch of road is a designated Safety Corridor. This is the only road connecting Anchorage with Kenai Peninsula communities and it is heavily trafficked by residents, visitors, businesses, and industry.

Objectives of this project are to decrease high-severity crashes and improve traffic operations to alleviate traffic congestion. Proposed improvements to meet project objectives include:

DOT&PF will continue to work collaboratively with the Alaska Department of Natural Resources (DNR) to improve CSP access within the project corridor, including potential improvements to existing CSP facilities and new CSP infrastructure. 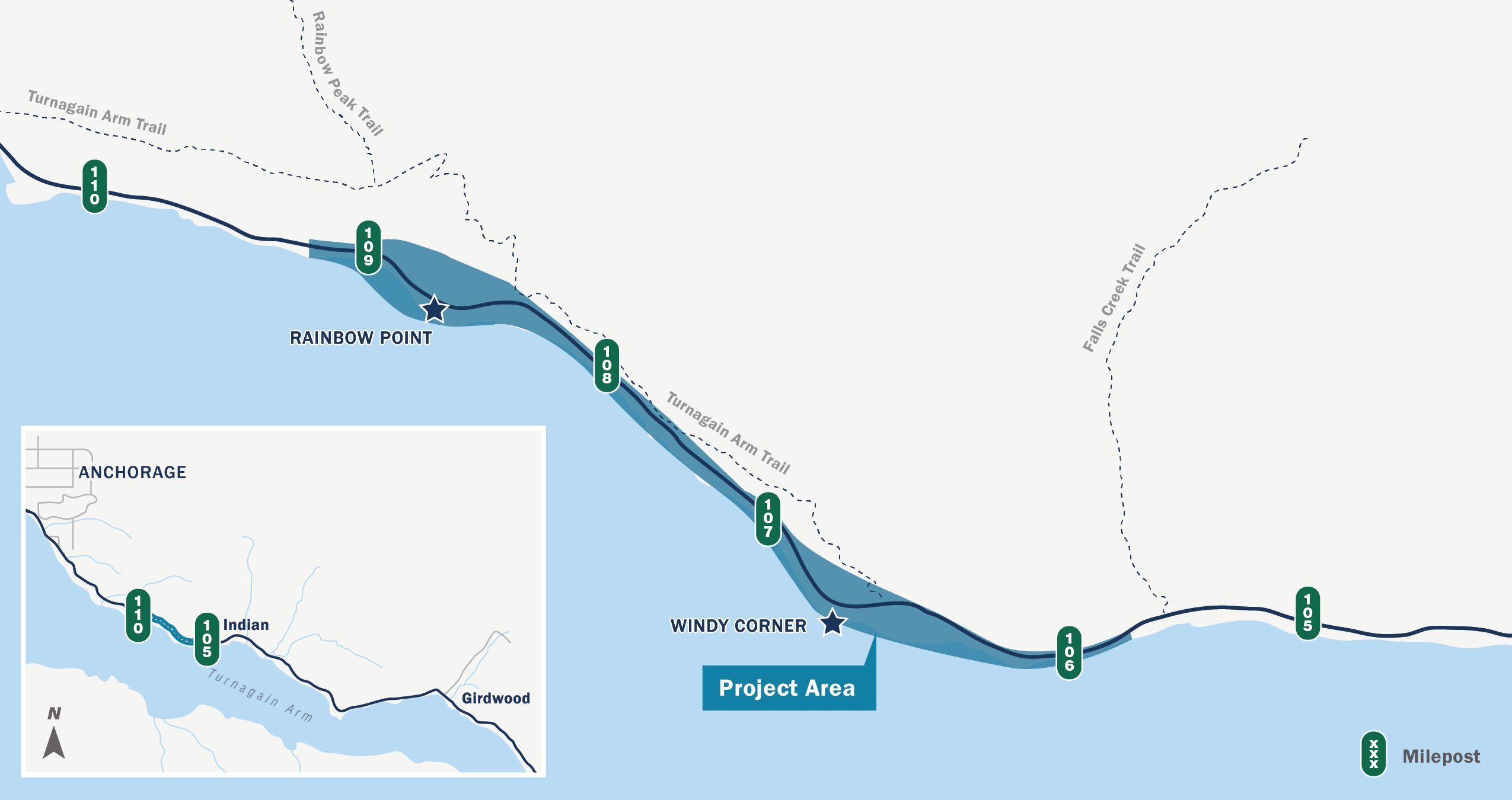 The efforts to improve safety along the Seward Highway between Anchorage and Girdwood began in the early 2000s. A Categorical Exclusion (CE) was prepared for Seward Highway Safety Improvements, Indian to Potter Marsh, MP 105-115 project and the CE was approved in 2004 and reevaluated as a part of the smaller Seward Highway: MP 105-107, Windy Corner project, which kicked off in 2013. As a result of public feedback and consultation with the Federal Highway Administration (FHWA), the Class of Action was revised to an EA in 2017.

Agency scoping and public involvement was conducted in accordance with National Environmental Policy Act (NEPA) requirements to produce a Draft EA for the Seward Highway: Windy Corner (MP 105-107) project, which was completed in March 2020. After reviewing public comments, DOT&PF extended the project 2.5 miles between Windy Corner and Rainbow Point to address concerns. Public and agency scoping as a part of a new Environmental Document commenced in spring 2021 for the renamed project, Seward Highway MP 105-109.5, Windy Corner to Rainbow Point.

The proposed project is being advanced using a combination of state and federal funds and is being developed in accordance with FHWA guidelines. DOT&PF is conducting environmental analyses, preparing environmental documentation, and developing the design with input from the public as well as local, state, and federal agencies, including ARRC, DNR, Alaska Department of Fish and Game (ADF&G), National Parks Service, U.S. Army Corps of Engineers, Anchorage Fire Department, and others.

The environmental review, consultation, and other actions required by applicable Federal environmental laws for this project are being, or have been, carried out by DOT&PF pursuant to 23 U.S.C. 327 and a Memorandum of Understanding dated November 3, 2017, executed by FHWA and DOT&PF.